That’s why we believe in spreading the word about the advantages of Ruby and showing that it is a valuable technology. Obviously, we don’t forget about its cons, perfect technologies do not exist. Each has something that distinguishes it from the others and some features that don’t always work well.

So, let me start with the pros.

This is one of the greatest advantages of this programming language. Ruby in combination with the Rails framework allows you to create software relatively quickly. It is believed that Ruby is one of the most time-efficient languages on the market. You can hear such a statement from many Ruby on Rails (RoR) supporters. Of course, this is a subjective opinion, but there is, undoubtedly, a lot of truth to it.

There are reasons why Ruby on Rails is eagerly chosen by startups that want to quickly create their product. The MVP (Minimum Viable Product) approach is also often associated with Ruby and Rails. You can hear a statement that it is a perfect technology for the development of this type of product.

GitHub is where you'll meet tons of Ruby developers. They form an extensive community which also increases the attractiveness of this programming language. You can easily use these snippets, better known as “gems”, as a basis for your own projects – you can use the saved time to focus on more difficult and important tasks.

Moreover, the community of Ruby developers is constantly growing on GitHub. They are all highly active, which has a large impact on the future perception of the development opportunities for this language.

RoR is an open-source framework based on databases according to the MVC (Model-View- Controller) pattern. Developers who use it on an everyday basis praise its simplicity. In fact, the database and the web server are more than enough to run an application. Thanks to the DRY (Don’t Repeat Yourself) rule, developers avoid repeating the same work at various stages of the application development which significantly accelerates their work.

One shouldn’t forget another important method available on Ruby – Convention over Configuration. It assumes that the necessary configuration will be minimized by replacing it with ready-made models.

Ruby on Rails promotes the use of web standards, good engineering practices and design patterns. It can be easily integrated with front-end frameworks. It has an agnostic database and provides background processing.

Another important aspect relates to testing. It plays a big role in writing reliable software. Ruby developers utilize advanced testing techniques, like mocking and stubbing. They are strong advocates of Test-Driven Development and Behavior-Driven Development.

Pros of Ruby: #4 The highest standard of safety

Ruby in combination with the Rails framework is considered a very secure technology. It has built-in securities and functionalities that make the application safe and ready for any attack or attempted intrusion. It is all about built-in protection against XSS, CSRF and SQL Injection attacks, which are rated among the most popular attacks on web applications.

This is one of the arguments most often mentioned by Ruby's opponents. It concerns the speed of the applications built with Ruby, which may be a bit slower in comparison to other technologies available on the market. In this case, there may be a problem with the scalability of such an application.

However, remember that we are talking here about applications that have a large user base, such as Twitter or Groupon. This problem should not occur for smaller product types. It is also worth adding that the problems with performance results from the server or database architecture issues.

The natural area to use Ruby is building web applications. There, this technology will work best. The matter becomes more complicated if the product is to have some non-standard features as adjusting it may be a bit more difficult. The entire development process can be extended by configuring routing, database migrations or other necessary actions.

Ruby is still seen as a niche language. Although it has developed a lot since its inception, it still is not the first choice for back-end programmers. The popularity is also associated with the limited number of Ruby developers on the market. It is much easier to find Python or Java specialists.

Just look at the latest ranking issued by Stack OverFlow showing the most popular technologies. In 2020, Ruby only came in fourteenth. This is a decrease by two positions if compared to 2019 (8.4% vs. 7.1% of popularity). 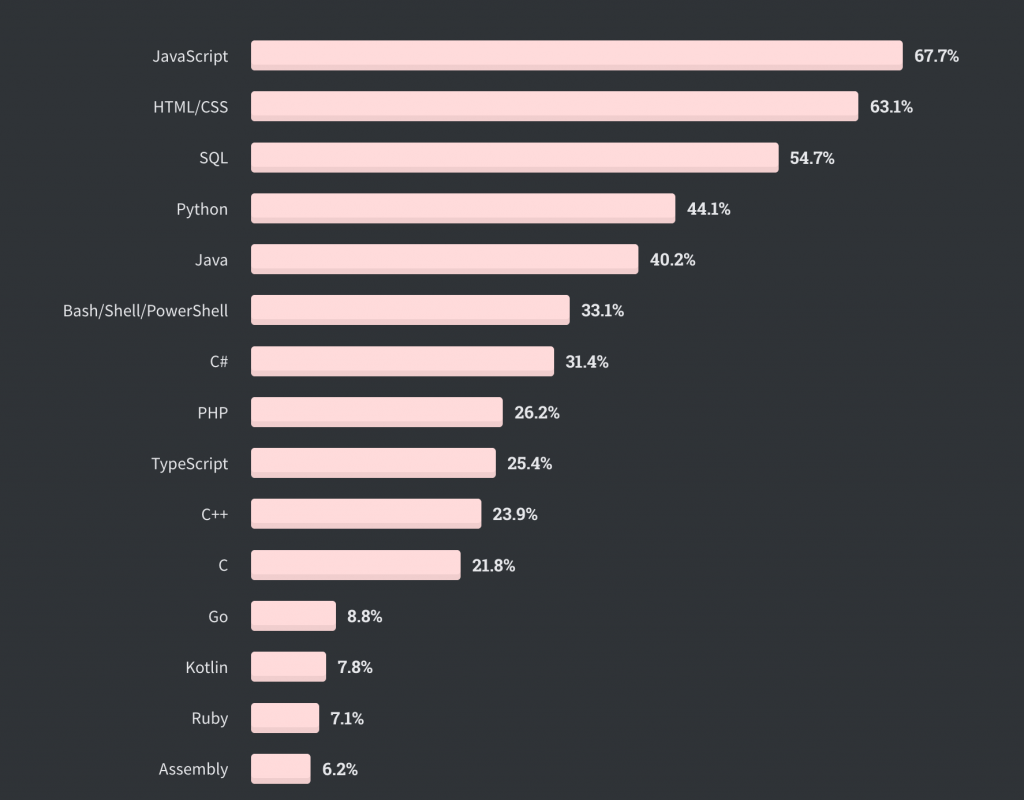 Ruby, like any programming language, has its strengths and weaknesses. Furthermore, Ruby on Rails is absolutely one of the finest back-end web development frameworks you might consider for your next project. These words are confirmed by companies that have used this language and its Rails framework to develop their products. These are, among others, Twitter, Basecamp, Groupon, Airbnb or Shopify.

Finally, it is worth mentioning that Ruby is constantly being developed and new versions of this programming language appear regularly. This certainly has a positive effect on its perception in terms of its future potential and attractiveness.

In case of any questions regarding to best code practices, you can reach The Codest crew out to consult your doubts.

High demand for Ruby developers. Where is it worth finding real professionals?

Python vs. Ruby? Which technology should you use for product development?