Today we will introduce you to some of the laws described in the book “Laws of UX: Using Psychology to Design Better Products & Services” by Jon Yablonski, published by O’REILLY. This book had its Polish premiere at the end of 2021, it was already available in English in 2020. The book is one of the latest publications in the UX section. The book is an extension of the contents of the Law of UX website (https://lawsofux.com/), also authored by Jon Yablonski.

Jon Yablonski is an award-winning multidisciplinary designer, speaker and digital creator. He is fascinated by the interface of UX design and creating the front-end of websites. He is passionate about developing user journey maps and prototypes as well as expanding ideas of interaction design. You can find more information about him on his LinkedIn profile.

The book is intended for anyone who wants to develop their research skills and become a more conscious designer. It focuses on the design of digital products. It is an accessible introduction to the basics of psychology that can be applied to design. This knowledge becomes especially valuable nowadays, when it is no longer enough for a company to have its own website or mobile application, but it is expected to deliver user-friendly one and thereby meet the company's business goals.

Applying principles derived from psychology in your projects can be both an addition to qualitative and quantitative research and, in cases when the designer is not able to carry out standard research, UX laws will become the main key to creating the UX of the project.

This book covers the following topics:

In our article, we will discuss the first three of them. We encourage you to read the book or check out the Law of UX website to learn about the rest of them.

This law says that users transfer the expectations developed on the basis of one known product to other similar products. The feeling of knowing the operation of a given type of product enables the user to start working without delay. The user uses your product to achieve a goal — e.g., find a flat, buy a car, order a new dress. If the person meets cognitive obstacles on their way, they will not know what to do, which menu to choose or how to find the functions they need. Eventually, they will leave your website upset and, in the future, will be less eager to come back to it. And this, unfortunately, will have a negative impact on the profitability of your company.

By using existing mental models, it is possible to provide users with a better experience where they can focus on completing their tasks instead of learning new models. The sooner the user reaches the desired goal, the faster you will achieve profits (e.g., in the form of sales). By making it easier for the user to use your solution, you accelerate your profits.

This law also applies to changes in existing digital solutions. When making changes to your product, you should limit the dissonance by giving users the option to continue to use an older (well-known) version for a limited time. An unexpected change in the appearance of the interface, without the time-limited possibility of continued use of the version they were used to, is not a good idea.

For example, this law is behind the appearance of form controls in digital products — they look like elements on control panels:

Fitts's law focuses more on the visual aspects – the arrangement of interface elements on the wireframe. According to this law, the time needed for a user to interact with an object depends on its size and their distance from it. Accordingly, the larger the object, the shorter the time it takes to use it.

This law is described by a mathematical formula: 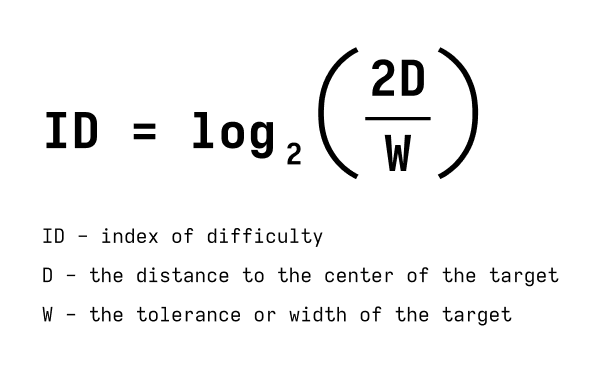 Touch targets should be large enough for users to hit them accurately — so they can't be too close together or too small. It is best to follow specific guidelines for minimum size of touch targets: 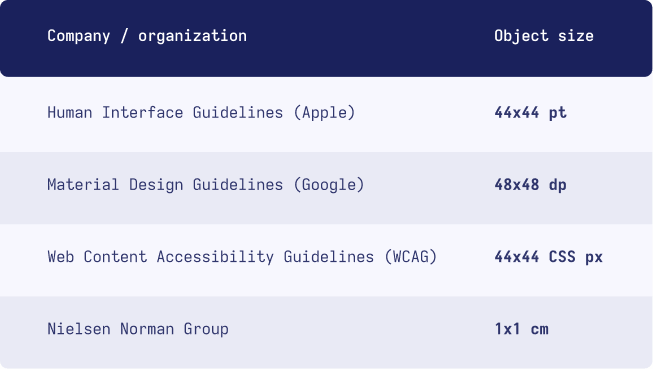 The key is to adjust their size and location to the display technology (website, tablet or mobile application). In addition, touch targets should be placed in areas of the interface that can be easily reached.

According to this law, it is recommended that the touch target area, e.g., for forms, covers the entire form field: the label, the input field and the margin around them. This will allow the user to use the field faster than if the touch area would be limited to the input field only.

Hick's Law states that the time needed to make a decision increases with the number and complexity of the options available. So, when reaction time is decisive for the decision-making time, the number of options should be minimal. Keep in mind that breaking down complex activities into smaller steps reduces the user's cognitive load. Highlighting the recommended options protects the user from feeling overwhelmed. Synthesizing information and presenting it in a way that is not intimidating to the people who use your products is one of the main responsibilities of designers.

This law is described by a mathematical formula:

A great example of the application of this law is the simplification of the appearance of remote controls for TVs compared to their older counterparts. In the past, the remote control had several dozen buttons on it, which made using it a real challenge, especially for the elderly. Nowadays, remote controls are extremely simplified. Less frequently used functions are placed in additional menus on the graphic interface of the TV set. Thanks to this, the physical form of the remote control has only the most important buttons (e.g., volume control and on/off button).

The work of a UX/UI designer is extremely complex. This person should have competences in many areas: design, psychology, sociology, mathematics, technical IT skills and highly developed soft skills (including, above all, empathy). Knowing how to use programs is not enough anymore. An advantage of your company lies in employing a highly qualified expert in the field of design who, apart from aesthetic aspects, will also make the products user-friendly so your company's goals will be achieved. Investing in the work of an experienced UX/UI designer will pay off in the future and support your path towards becoming a market leader. The book “Law of UX” is, therefore, a great source of valuable psychological knowledge, presented in a way that is understandable for people who are not psychologists. We highly recommend reading this book.

How to Build a Digital Product from Scratch

How to Find the Best Product Design Services Company?